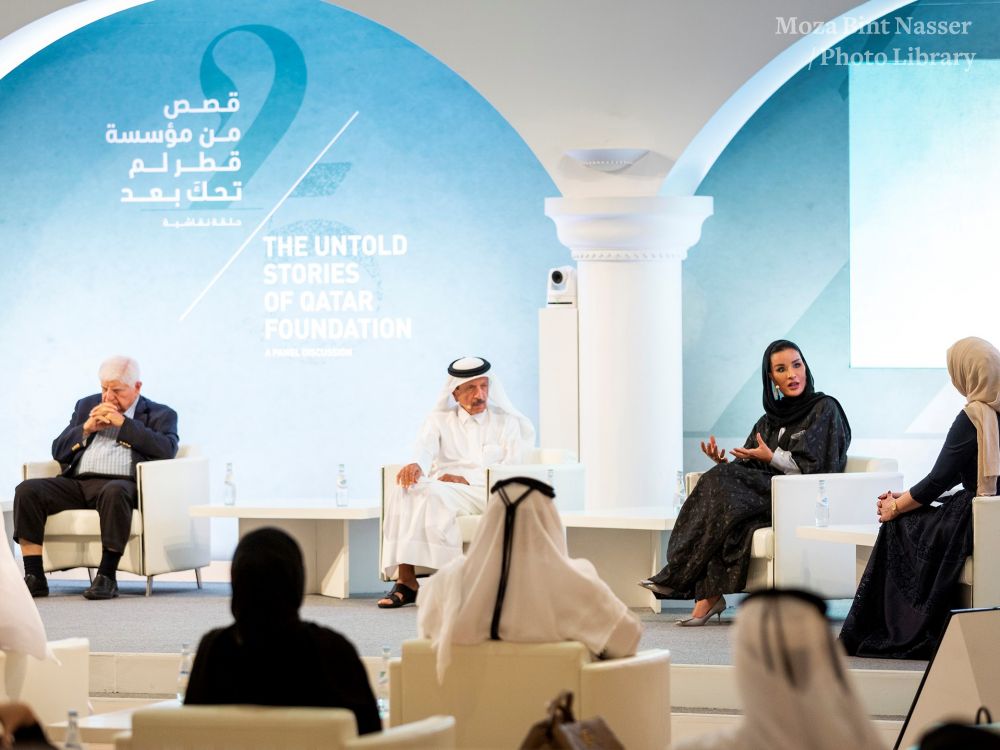 “Tomorrow was made at Qatar Foundation” – that is how Her Highness Sheikha Moza bint Nasser, Chairperson of Qatar Foundation (QF), summed up the impact of the organization on a nation, as its very first days were revisited by those who were instrumental in turning a vision into reality during a special panel discussion aired on Qatar TV this evening on the occasion of the 25th anniversary of QF.

The Untold Stories of QF saw Her Highness, who envisioned and founded QF in 1995 with the support of His Highness the Father Amir Sheikh Hamad bin Khalifa Al Thani, give unprecedented insight into why QF was established and the belief that made it happen. Joined by the central figures in QF’s establishment 26 years ago, the panel recounted the plans, challenges, goals, and milestones that lined the path to creating a globally unique ecosystem of education, science and research, and community development.

“Our belief in the success of Qatar Foundation as a project was deep-rooted, despite the challenges and curves that we faced at the beginning of our journey more than 25 years ago,” she said. “In 2005, on the day Education City opened, we promised that tomorrow would be here. And, indeed, tomorrow was made at Qatar Foundation.

“We never looked at Qatar Foundation’s projects, centers, and initiatives as being there to serve a specific geographical area. We thought of it as Arab-Islamic renaissance project, based in Qatar, to promote sustainable development in the Arab world, by creating positive change from an academic, research, and societal perspective.”

Her Highness spoke of how QF’s first school, Qatar Academy – established in 1996 – was born of “two dimensions”. “The first came from my role as a mother who had concerns about the education of my children, and the second was national, reflected by our role in the development of society,” she told the discussion, filmed at QF’s former headquarters within Education City.

“At the time, I realized we were facing a national challenge related to education, and we needed to make a radical change in the educational system by providing advanced, quality education – based on the logical analysis and rational deduction that were central to previous Arab civilizations and applied in Western civilizations, while at the same time preserving our heritage, language, and national identity.

“The Qatar Academy project grew and developed, and it was necessary to continue the process of progress by building the components of higher education and a culture of scientific research at QF, in order to support the development of our community.”

As Her Highness explained during The Untold Stories of QF, originally it was planned to establish a single university at QF. “But we asked ourselves about the effectiveness of repeating experiments that had not succeeded in many societies,” she said.

“We recognized that every new beginning comes from some other beginning’s end, so we started to attract prestigious international universities to Qatar according to the disciplines that met national needs, in order to provide an ecosystem based on creativity and innovation which enables us to cultivate, localize, and reproduce knowledge.

“One of the challenges we faced during our negotiations with international universities was their questions about the academic level of our students. But our belief in human capabilities in Qatar and the Arab region was solid. We knew that if these young people were given the right educational environment and the right opportunities, the world would witness their achievements. And that is what we see today.”

Another challenge facing QF as it evolved, according to Her Highness, was “building a culture of scientific research” in Qatar. But she said: “We believe that innovation is the basis of the philosophy of Qatar Foundation.

“We wanted Qatar Foundation to be an incubator for scientists, researchers, and innovators across the Arab world and worldwide, because we recognize that scientific research continues as long as human life continues.”

Among the key figures in QF’s establishment who spoke at The Untold Stories of QF was His Excellency Yousef Hussain Kamal, former Minister of Economy and Finance, who said: “Successful economic models have been built in many developed countries, such as Japan and Singapore, that do not have natural resources but invested in minds.

“Nurturing engineers, physicians, diplomats, and others at Education City was a successful investment idea designed to support the goal of economic development, instead of having a reliance on scholarships abroad for knowledge acquisition. What we needed was to produce knowledge.”

His Excellency Dr. Ibrahim Al Ibrahim explained how “the model of the ecosystem we looked to build did not exist anywhere else in the world at that time”, saying: “This increased the challenges and difficulties, as our goal was to attract international universities based on their excellence in the majors we needed – especially the oil and gas industry – to support the development of Qatar.

“We worked hard to assess the strengths of each university, according to our perspectives and needs, and we were able to achieve what we aspired to achieve.”

The discussion also heard from Her Excellency Dr. Sheikha Abdulla Al-Misnad, who said: “The QF project, with all its aspirations, was new for us, and for the world. In the beginning, there were some tensions, which is normal when starting a project of such local, regional, and international scale as QF.

“However, the determination of QF’s leadership to achieve the vision for this foundation created a national motivation, so that the vision for QF became our vision as Qataris, and we worked to implement it to support the renaissance of Qatar.”

During the program, Dr. Saif Al-Hajri emphasized that: “From its inception, QF has been built on such solid pillars as national identity, supporting the ambitions of our children and the aspirations of their families, and achieving a balance between openness based on global experiences, and preserving our heritage and values.”

And in a specially-recorded video message, Dr. Fathy Saoud, the former president of QF, said: “We tirelessly knocked on doors during our negotiations with the most prestigious international universities, to build cooperation and partnerships with them. And we succeeded, until we reached the day when the doors of QF were being knocked upon by well-known international universities keen to establish partnerships with Qatar.”

Meanwhile, AbdulRedha AbdulRahman told the program how the idea for QF’s Qatar Science & Technology Park innovation hub came from recognizing that “the sustainability of education requires the existence of scientific and technological research”.

“At the same time, social development requires a culture of scientific research and the spread of innovation and creativity,” he said. “So research, development, and innovation became the third part of what I call ‘the Qatar Foundation triangle’, inseparable from education and community development.”