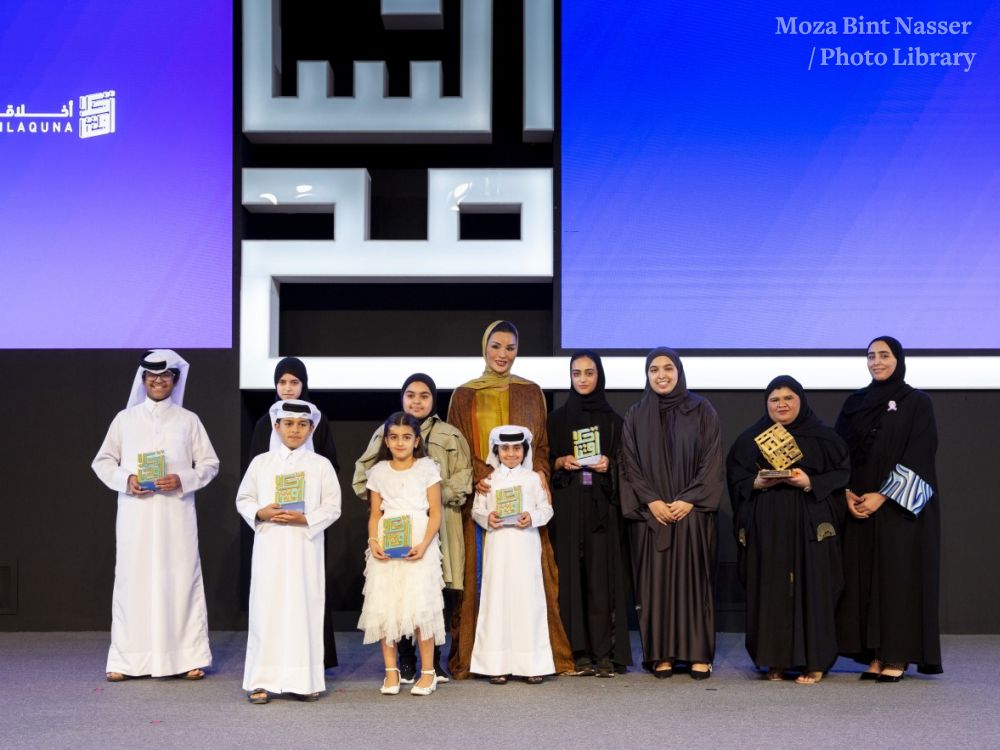 Her Highness Sheikha Moza bint Nasser, Chairperson of Qatar Foundation, awarded the latest batch of winners of the Akhlaquna Award and the Akhlaquna Junior Award with the accolades that their morals and values have earned them at a special ceremony in Education City.

Al-Anood Al-Kubaisi, Lolwa Al-Musafri, and Fatima Al-Naimi were crowned the Cycle 4 winners of the Akhlaquna Award for their initiative Grass Banking, which brings together education and agriculture. The project was founded when they were at school and it has worked to identify neglected areas that can be turned into green spaces for future generations to adopt. The project has helped families in need meet their food requirements, in cooperation with Qatar Charity, and, as Al-Naimi says: “The agricultural environment contributed to an increase in the oxygen level in the air, and the recycling of plant residues helped us make compost…We want to create a new brand in the Qatari market for all kinds of fruit and vegetables.”

Other projects shortlisted for the Akhlaquna Award were Qatar Medical Students’ Association, which aims to bring together medical and healthcare students across the country to help shape the future of Qatar’s healthcare landscape; and Step One Kids, a YouTube channel that educates Arab children, in an entertaining way, about the right way to live, talk, eat, play, and nurture a range of other skills.

In the Grades 4-6 category, Rawdha Nayef Al-Emadi of Al Arqam Academy for Girls, Abdualla Hilal Al Mohannadi of Qatar Academy Al Khor, and Shouq Hamad Al-Adbah of Khadija bint Khuwailid Primary Independent School for Girls were named as the winners; while in the Grades 7-9 category, AlJohara Hassan Al Subaey was the recipient of an Akhlaquna Junior Award.

Built around the core moral values of mercy, honesty, generosity, and tolerance, and reinforcing the interconnectivity between knowledge and morality, the Akhlaquna Award was established by QF in 2017. It recognizes members of Qatar’s community aged 15-24 who display social awareness, compassion, and thoughtfulness, and who consequently inspire others and improve others through their actions, ethics, mindsets, and devotion to driving positive social change.

Akhlaquna Junior – which has now completed its second cycle – honors school students aged 7-14 who uphold the morals and values that the Akhlaquna initiative seeks to cultivate, while showing young learners throughout Qatar how they can translate these into tangible actions both within their schools and in the wider community.