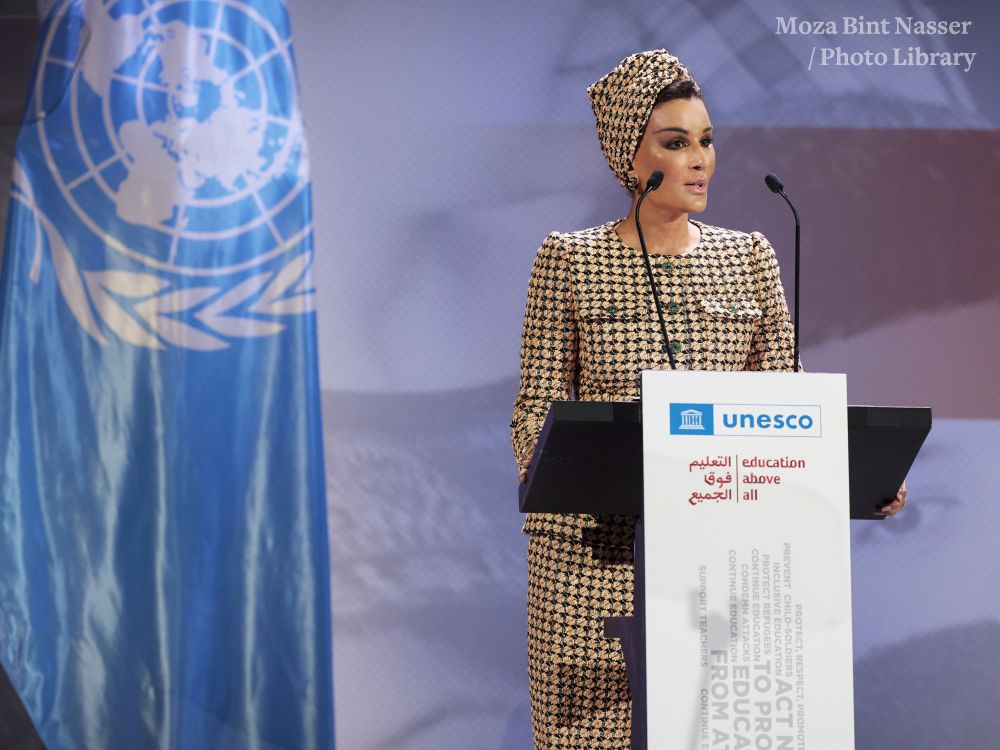 Her Highness’ speech emphasized the importance of mobilizing immediately to find creative solutions to put a stop to attacks on education worldwide. Drawing a comparison with the speed and creativity employed by the international community during the Covid-19 pandemic to ensure that education continued, HH asked why the same ingenuity cannot be directed to find solutions for the persistent problem of attacks on education. She called on the international community to recognize that as children returned to their schooling this past week, across the world millions of children were unable to do so due to attacks on their education.

She implored the international community not to ignore the “millions whose school buildings were destroyed or damaged, or occupied by soldiers. Millions who simply do not have access to education because of conflict”.

“Why are we not responding now, with solutions to another great crisis: the crisis of educations on attack?” she asked.

HH addressed the challenges she faced over the years her long commitment as an advocate for education. “For nearly a quarter of a century, I and my team have tried to convince the international community that educating children matters — and this includes all children. All children matter. Poor children, isolated children – and children who live in, or flee war zones.  For years we have chipped away at the apathy displayed by world leaders and policymakers.  We have made incremental steps in achieving a global norm condemning attacks on education. Last October, the Security Council unanimously adopted Resolution 2601. And yet, since thing thousands of attacks have taken place.”

During her speech, she remarked on the importance of education “as the very weapon, children use to overcome the challenges they face,” emphasizing that “through education, our young people learn the skills they need to find a job, to contribute to their communities, to feed themselves and their families.”

HH concluded her speech with a call to action to the international community, and in particular large technology companies to search for solutions through which children from conflict-affected areas can continue their education.

The High-level Event kicked off with a distinguished letter from Secretary-General of the United Nations António Guterres. The UNESCO Secretary General, Audrey Azoulay, President of Ghana, Nana Akufo-Addo and Her Royal Highness, Maria Teresa, Grand Duchess of Luxembourg, were in attendance. Also speaking at the event, was Virginia Gamba the Special Representative of the Secretary-General of the United Nations for Children and Armed Conflict.

During the event, Her Highness toured an art exhibition on the side-line of the event to Protect Education From Attack which included art pieces created by youths affected by conflict.